Beyond what you see below please check out and follow us on our social media accounts:​

CURRENT AND PAST REPORTS: 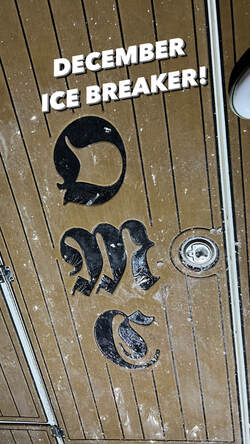 12/6/22 - The caption says it all. Just ran a trip out of Oceanside on the OMC 31. We had some opportunity and had two swings that didn't connect. Unfortunately that is ghost hunting! For those who do not know "ghost hunting" is chasing the bluefins on the fall migration south. Many of them are here today and gone tomorrow it seems so we call them ghosts. Weather windows are tough to come by and when we get a shot - you gotta go! We had fish until December 21 last season... sushi for Christmas! Let make it happen again! Its definitely NOT over! 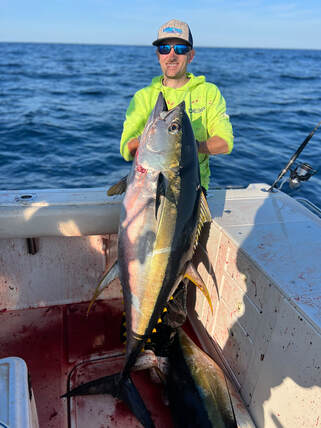 11/5/22 - What a finish to the yellowfins! The storms were BRUTAL this fall, screwing up the water right after Hurricane Ian close(ish) to shore, forcing us to run to Hudson Canyon. Several trips to the Hudson did not disappoint. Easy limits of yellowfins and some big eyes mixed in. Unfortunately it was too much of a distance/time commitment for many to go, and the windows were small when they presented themselves. Another fantastic end to the offshore season in Rhode Island.

We are officially done fishing out of Watch Hill. Some major news coming in the way of off season work. We are still available to run from Oceanside from now until it snows or the bluefins head south for good. Lets find us some top water ghosts!!! 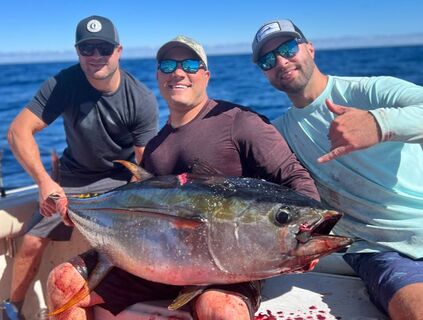 10/13/22 - Its been a bit since the last report but the fishing has been nothing short of incredible... when we can get out. Unfortunately the two hurricanes that passed by offshore have moved water that was nicely tucked inshore and loaded with stud yellowfins has moved off into the canyons. This has made for some very long day trips for us but entirely worth the effort, filling the fish boxes easily! There are still bluefins around of all sizes but several giants in the 100" range. Soooo want to test your skills on a monster bluefin? Now is your chance! 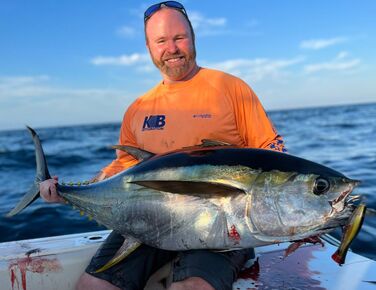 9/5/22 - Well, Its been over a month since the trolling gear has hit the water and this is good news as the popper bite is about as good as it has ever been! Yellowfins, bluefins and even a big eye! We are super stoked to see what September will bring. We are fully stocked for the chunk bite at the canyons or midshore but for now we will keep riding the popper train as we have seen some pretty damn epic surface explosions! 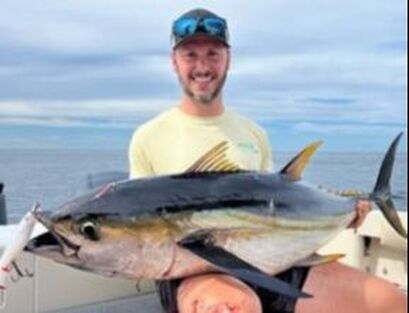 8/14/22 - The jig and pop tuna bite is on fire at the moment. We have had over a solid week of large recreational sized bluefins typically in the 68-70" range. As the week progressed and the fleet became too much we picked up and ran to some water that looked great on the charts. We were greeted with phenomenal yellowfin feeds which were CRUSHING the poppers! Inshore the bass bite continues to be hot as it has all season. Now is the time to get the last minute offshore trip booked! 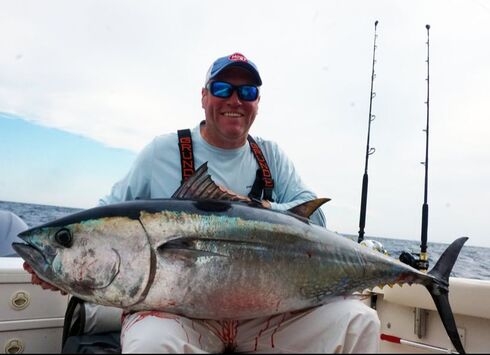 7/20/22 - Lots of yellwfins have moved in and we have enjoyed the mix bag of big bluefin/yellowfin trips for a little while now. With water temperatures up the mahi and wahoo are are also showing face. Inshore waters are warming so the striped bass daytime bite is there but so are the bluefish. Night time has been really damn good as usual! 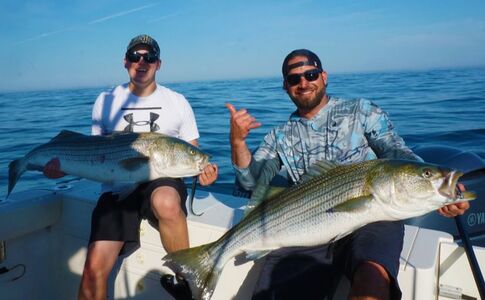 7/5/22 - Fishing is still insanely hot on the bass grounds. Daytime or nightime all on light tackle casting set ups. No live bait, no trolling. Seabass and fluke are spotty and we really have not spent much time targeting them as the bass fishing has been so good. Most bass are well north of 40". We have a bunch of tags on the boat for the bass so clients have had a good time tagging their fish they catch and releasing them. Offshore the tuna bite is a grind. Bites are there but you need to make them count. Giant bluefins are around and putting a whooping on the spin gear. Some of the midshore tuna runs are long distance but there are some yellowfins in the mix. Closer to home its all large class bluefins. Unfortunately we are not seeing the schools of fish as we have for the last 7 or so years so needless to say its not just the clients that are frustrated. Eat your wheaties... the odds of hooking into a 90" bluefin are pretty high right now. 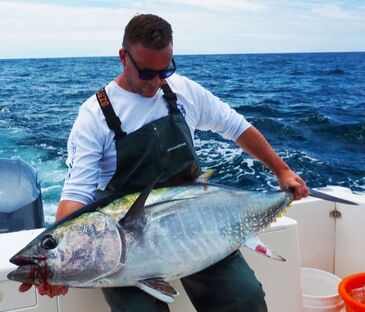 6/22/22 - We have been extremely busy the last couple of weeks on the water with some damn good fishing. The striped bass bite inshore is absolutely incredible with several fish over 50 pounds. Top water bites on the slot fish and light tackle jig bites on the larger class fish... NO TROLLING! On the offshore front we landed a fat 53" bluefin on a spreader bar and had a few hook ups that ended up coming unbuttoned or breaking off. Regardless, the tuna season is officially in full swing. Unfortunately we have been battling a pretty difficult weather pattern this spring/early summer. Fingers crossed on he hopes of this changing for the better soon! 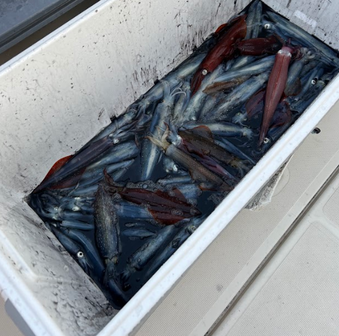 Starting to fill the cooler during the day light hours!
​5/22/22 - Another solid week on the squid grounds. Some nights being spectacular and some nights better than average. Regardless, its been red hot! While water temps are still a bit on the cool side we are seeing the bass and bluefish move in. Lots of local stripers to keep anyone busy. We are begining to run for bluefins as we get weather windows although mother nature has not afforded us the opportunity just yet.